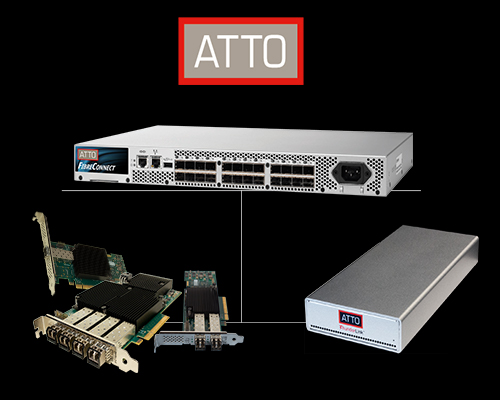 Featuring driver support for Windows and Linux (OS X support coming 2016), ATTO’s 40GbE FastFrame adapters are the fastest performing 40GbE NICs on the market today. The near-line-rate throughput ATTO can achieve is made possible by RDMA over Converged Ethernet (RoCE) support, which minimizes both latency and CPU utilization to drastically improve transfer rates than those of the competition.

ATTO FastFrame 40GbE NICs can support both the high-bandwidth, low-latency needs of users of high-resolution digital video, such as 4k and 8k video, while also featuring a power consumption profile that enhances the overall ROI and efficiency in data center aggregation applications, cloud computing deployments, and other high-performance, low-latency IT applications.

FastFrame 40GbE adapters can move up to 116.32% more data than competitors for the same cost of power, will cost less than 46% to power over the lifetime of the product.

The new 4k and 8k video formats being adopted by the film/television industry for production and post-production come with new requirements to support those workflows. 10GbE technology paved the way for Ethernet in the media and entertainment space by providing the necessary throughput for HD video. It also addressed technical issues such as high latency and packet loss that had prevented the otherwise widely-used transport mechanism from being deployed in post-production environments. Now the move to new formats, along with the proliferation of animation and special effects in everything from TV shows to blockbuster movies, is driving a need for studio infrastructure that supports multiple high-resolution streams.

The industry-leading latency and throughput provided by ATTO’s FastFrame 40GbE NIC makes it suitable for uncompressed 4k and 8k applications. A single stream of 16-bit 8K EXR video at 24fps requires 28.2Gb/s of bandwidth. While that need can be met by multiple ports on a 10GbE NIC, using a single port on a FastFrame 40GbE NIC provides a more cost-effective and power-efficient solution. It’s also important to note that FastFrame achieves near-line rates on 40GbE, while most competing NICs on the market perform at less than 30Gb/s.
FastFrame’s near-line speed throughput is enabled by careful latency management and its implementation of Remote Direct Memory Access (RDMA) over Converged Ethernet (RoCE). This feature uses zero copy data transfers to permit more efficient data movement between servers and storage, freeing up the host’s CPU for editing, compositing and rendering. RoCE is already a standard in latency-sensitive markets such as high performance computing clusters (HPCC), and is seeing increased adoption in editing workflows due to its latency and CPU utilization benefits.

Scale-out Network Design with 40GbE and 10GbE
While the need for 40GbE bandwidth is being driven by transcoding/encoding, rendering and effects, 10GbE still has a place in these workflows for related tasks with lesser performance requirements such as business applications and playout. NAS storage is often used in editing environments due to the homogeneity of the protocols used (NFS RDMA, SMB Direct, etc.).
Scale-out versions of NAS allow for easy expansion of that storage—necessary as higher resolution video eats up more and more storage space.