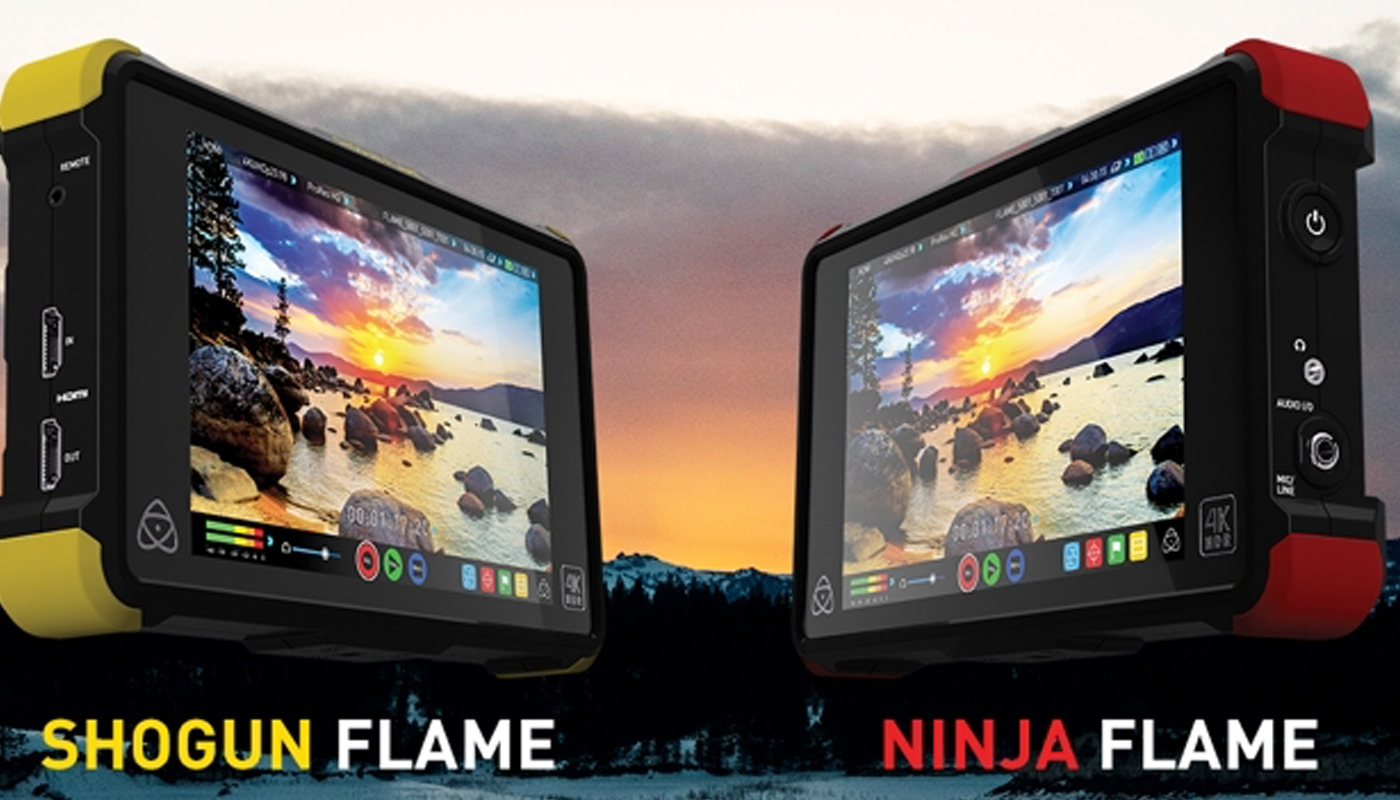 In the same way that the original Atomos Shogun helped fast track the transition from HD to 4K filmmaking, Atomos are intent on delivering 4K HDR to everyone with the launch of the SHOGUN FLAME and NINJA FLAME.

The Atomos Flame Series delivers the world’s most advanced 7″ field monitor, accurately displaying 10 stops of the luminance detail of Log with 10 bit HDR Post Production colour accuracy for the first time in a field monitor. The AtomHDR engine not only resolves HDR brightness detail (dynamic range), with 10-bit Colour processing it also resolves 64 times more colour information than traditional 8-bit panels. For Rec709 standard dynamic range scenes the 1500nits brightness aids with outdoor shooting as does the upgraded power management system that will keep you shooting longer in the field. Of course you also get the professional 4K/HD ProRes/DNxHR Recording, Playback and Editing that has made Atomos famous. Shogun Flame and Ninja Flame will be shipping before the end of March.

The Flame series of monitor-recorders are equipped with the AtomHDR engine, utilising the power of the 1500nit panel in tandem with Atomos’ patent pending image processing to resolve the brightness detail of Log camera signals with the colour accuracy of 10 bit HDR images mastered in post production. This means that the usual complications of exposing Log signals on a washed out image are eliminated – with AtomHDR you simply frame, expose, focus and shoot. All major camera makers log formats are supported – Sony, Canon, Panansonic, Arri, Red and JVC.

The monitor itself is a calibrated 7″ 1920×1200 325ppi panel with upgraded 10-bit FRC, resolving 1.07 billion colours compared to the 16.7 million colours of traditional 8-bit panels. This all but eliminates the colour branding seen on traditional panels and in tandem with AtomHDR lets you see images as you would with your own eyes.

For scenes that do not have the wide brightness variation required for HDR shooting, switch to traditional video mode (Rec709) and activate a Brightness slider that lets you take advantage of the impressive Daylight viewable 1500nits of brightness emanating from the Flame units. This adds huge versatility for the Flame series; if you have scenes that call for HDR then the AtomHDR engine can be activated; if don’t require HDR support, switch to High Bright mode for outdoor monitoring hood free.

Shogun and Ninja Flame have a rugged built in armour ensuring it is battle-ready for the field and also now inherits the Atomos patented continuous power system pioneered on our HD range. The hot-swappable dual battery system automatically swaps to the second battery when power is low, allowing hot swapping to new fresh batteries. This coupled with Atomos’ all new improved battery charger that is 3 times faster means power is always taken care of.

The addition of AtomHDR, the 1500nit brightness, 10-bit FRC and Continuous power genuinely positions the Flame Series as the best 7″ Field Monitors in the world, but as we know with Atomos they are much more than monitors alone, featuring advanced recording, playback and editing capability as well. Both units record 4K/HD direct from the sensor to 10-bit 4:2:2 Apple ProRes or AVID DNxHR/DNxHD onto affordable yet reliable SSD’s from the world’s leading media brands. They also feature on the fly 3:2 and 2:2 pulldown removal and advanced recording features such as Timelapse & Pre-roll. Playback with controls is possible on screen or out to larger monitors and you can even use the built-in focus, framing and exposure tools to judge the shot and then start tagging to make decision making in Post faster and easier.

The Ninja Flame is a HDMI only model with all of the above features and ships with a host of accessories including a HPRC hard case, a snap-fast HDR sunhood, fast battery charger, control cable, 2 x NP-F750 4 cell batteries, USB 3 Docking Station, D-Tap Cable, 5 x Master Caddy Cases and a 12 V 3A AC-DC Power Adapter. MSRP is 995GBP / 1295EUR excluding taxes.

The Shogun Flame is a HDMI & SDI model with bi-directional SDI/HDMI conversion, Raw to ProRes/DNxHR recording for select Sony and Canon cameras, balanced XLR audio input/output and LTC/Genlock connectivity. It features the same above accessories as well as the XLR breakout cable for an MSRP of 1295GBP / 1695EUR.

Initial shipments of Shogun Flame and Ninja Flame will commence at the end of March 2016.
For further information on either Flame model please contact us.